Posted on November 1, 2018 by Climate Tasmania

Political turmoil in Canberra in recent weeks has once again thrown the spotlight on Australia’s response to the Paris COP Agreement – where individual nations have agreed to take leadership in order to help restrain global emissions. 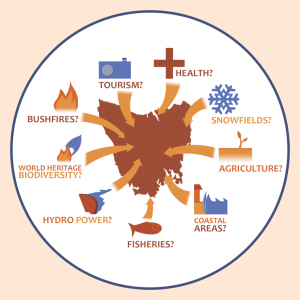 The Coalition’s internal schism over climate policy and Canberra’s subsequent withdrawal from renewable energy targets and other important components of national climate policy have resulted in a refocus on where state and local governments can pick up the pieces.

These rather tumultuous events have coincided with an impending review of Tasmania’s main climate Act – the Climate Change (State Action) Act 2008, due to be debated in parliament in coming weeks.

The Climate Tasmania advisory group is of the view that this is an opportune time for the Tasmanian legislature to take a serious look at Tasmania’s potential leadership role in the climate arena and has appealed to all Tasmanian MPs to work together to that end.

The following is text of a letter from Climate Tasmania delivered to all forty Tasmanian MPs on 18 September 2018.

Can the Parliament of Tasmania provide leadership on climate change?

It is now clear that the States of Australia, along with sub-national authorities everywhere, are central to the global effort to curb carbon emissions and otherwise limit the impact of climate change on their people. Australia’s failure at a federal level to meet this now-urgent challenge has a political component, but it is also a result of structural shortcomings.

State governments, closer to the action than their federal counterparts, have both the constitutional authority and the ability to achieve rapid emissions reductions. While being directly accountable for fires, floods, storms and other impacts of climate change, they are also best placed to innovate and to embrace the opportunities presented by renewable energy.

Climate change presents the Tasmanian Parliament with both unprecedented challenges and huge opportunities in preparing our community for a very different future. We at Climate Tasmania offer our help in defining the challenge and identifying the opportunities. We are an independent expert body, formed in 2015 after the disbanding of the Tasmanian Climate Action Council (TCAC), which had been set up under the Climate Change (State Action) Act 2008 [“the Act”].

Why now?
The global mean temperature has reached unprecedented levels in recent years. Over this year’s Northern summer multiple temperature, rainfall and wildfire records have been broken. Recent studies have shown that time is running out to achieve the Paris resolution to keep warming below 2°C, and that the future costs of not meeting that target will be enormous.

Tasmania’s claimed current low level of emissions is due almost entirely to low forestry activity. If forestry were to recover, or if major bushfires destroyed forest carbon reserves, the picture would be dramatically altered, putting us behind New Zealand in “clean green” credibility. To avoid losing that credibility, we need urgently to reduce actual emissions in the transport, industrial and electricity sectors. We would suggest this be approached as an Energy Transition.

The transition to clean energy – essential for a safe future climate – will inevitably be disruptive, but if Tasmania plans carefully, starting now, we can minimise this disruption.

Developing a comprehensive, detailed Climate Change Act with input from all members of both Houses will give Tasmania a framework for action which will survive changes of government.

What can the Parliament do?
The Parliament could develop a consensus Bill for an amended Climate Change Act outside the party system. Climate Tasmania does not claim any expertise on parliamentary procedure, but clearly Members of both Houses will have to be involved in developing the Bill. Could it be done by a Joint Committee chaired by one of an independent Member, for example?

We believe that problems can best be dealt with by getting to their root cause. The cause of our predicament is burning of fossil fuels; hence we argue that Tasmania’s climate action should be based on phasing out fossil fuels – the Energy Transition. We are continuing to develop a detailed policy agenda and stand ready to work with any member of either House who wants advice on the policies we think are needed to address this pressing problem.

We believe that with a spirit of cooperation across the Parliament Tasmania can truly lead an Australian response to the climate challenge. As a resolutely non-partisan organisation, Climate Tasmania stands ready to work with all Members of both Houses and all Parties to develop new, comprehensive legislation and strategies for implementing it.

We would welcome your response to this proposal, and look forward to working with you for the future benefit of our wonderful island community.

1 Response to Can Tasmania provide leadership on climate change?