Can the World Meet Paris Climate Goals Without the United States? 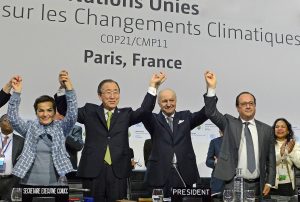 It’s been a week since the US elections elected Donald Trump as president and the above question is burning in the minds of all those concerned about climate change.

Nobody has a clear answer to this speculation right now. Here is one article that surveys the scene without being too fatalistic or naively optimistic.

“One thing is for certain: The complex pact to limit global warming to less than two degrees Celsius will live on. Even if the United States pulls out, enough other countries have ratified the agreement to trigger its entry into force. And many experts say they don’t expect the rest of the world to slack off on aggressive climate action simply because of the U.S. election…”

This entry was posted in Climate change responses, Climate science. Bookmark the permalink.