Posted on December 1, 2017 by Climate Tasmania

To illustrate that climate change is happening apace, science has told us a lot about melting glaciers, habitat losses, unseasonable weather all over the globe, rising sea temperatures, Arctic melting… all of this with voluminous supporting data. 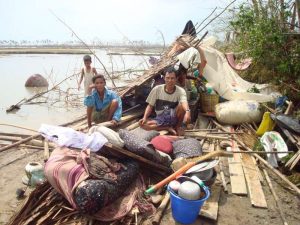 Yet as we now approach 2018, twenty two meetings of COP (the United Nations Framework Convention on Climate Change) the nations of the world have barely come to terms with the global climate change challenge, and in the public arena climate change is relegated well down the public’s concern rankings. Why is this so?

Climate Change is a social justice issue
This monumental failure has become the subject of much introspection of late amongst climate communicators. An important strand of this debate is an acceptance that there has been a failure to communicate and come to terms with the implications of climate change for human beings and, indeed, human civilisation.

This blind spot of communication has meant that even churches and social justice organisations often fail to address the climate issue at all, or see it as a minor part of their social justice portfolios – this despite catastrophic climate change being such an obvious do-or-die issue for humanity.

Imagining a different future
This is the title of a major international conference to be held at UTAS in Hobart this coming February.

Here’s the link if you would like to attend or be involved.